Being in the event industry for over 30 years, JPdL has been given the opportunity to organize many unique and successful events, but never has the team been involved in an inspirational event such as the one we were a part of this month. Recently, our JPdL Toronto & Niagara team joined hundreds of volunteers at INK Entertainment’s Kool Haus to kick start the ONEXONE Million Meals Movement. With the support of ONEXONE, JPdL took the charge, leading local youth, community members, and corporate partners to pack over 100,000 meals to be donated to children in need in Toronto and Montreal.

All the action took place during one day in late May, 2014. The team and volunteers got to work bright and early, and by noon pallets of thousands of water bottles, juice boxes, oatmeal, granola bars, and other food items, donated by Sodexo and Pepsico, lined the warehouse walls waiting to be packed. Just a few hours later, the warehouse was a frenzy of hundreds of volunteers bagging meals, unwrapping packaging, running boxes, stacking pallets, loading trucks, and sweating for a cause. Each JPdL staff member oversaw a table of forty volunteers packing one of seven different meals. Throughout the packing, bands Simple Plan and MAGIC! made appearances to thank volunteers and increase the excitement and noise. 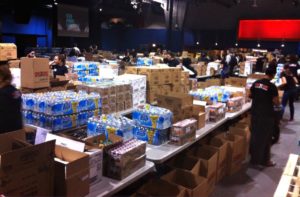 Joey Adler, founder of ONEXONE and CEO and founder Diesel Canada, made a touching speech as the event came to an end about the value of making a difference in human lives, one by one. Adler highlighted the immense, positive impact the volunteers and sponsors’ contributions will have on children across North America. As volunteers left the warehouse, many said they were happy to contribute to their community and felt reconnected with their city. Our team at JPdL couldn’t agree more. Having the team involved in an inspirational event such as ONEXONE, was the greatest experience of everyone’s careers.

ONEXONE is fighting to end hunger in North America with mega-events like the One Million Meals Movement and partners such as I Can Go Without. Everyone can chip in to fight hunger in North America through the I Can Go Without App: instead of buying a cup of coffee, for example, users can make a micro-donation to an organization of their choice. Check out their website for more information: icangowithout.com

We use cookies to ensure that we give you the best experience on our website. If you continue to use this site we will assume that you are happy with it.XPrivacy Policy